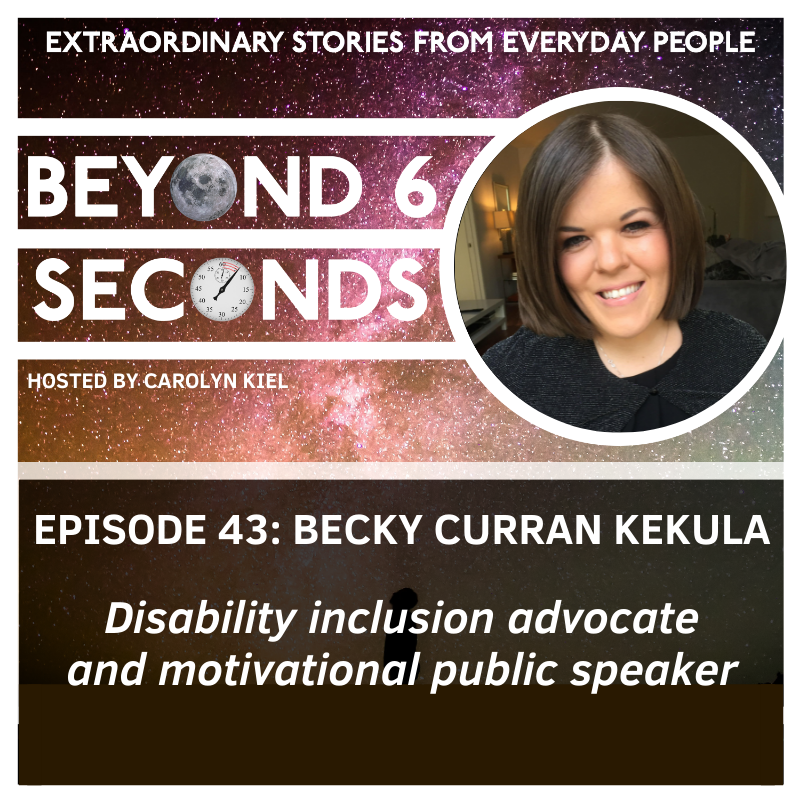 Becky Curran is the Disability Equality Index (DEI) Director at Disability:IN, where she is responsible for managing the overall DEI program. Born with achondroplastic dwarfism, Becky talks about her life & career as an advocate for increasing...

Becky Curran is the Disability Equality Index (DEI) Director at Disability:IN, where she is responsible for managing the overall DEI program. Born with achondroplastic dwarfism, Becky talks about her life & career as an advocate for increasing disability inclusion, including:

You can contact Becky on her website www.BeckyMotivates.com and learn more about her motivational public speaking and her story.

Becky received her Bachelor of Science in Marketing from Providence College, where she gained a passion for influencing change behind the scenes in the entertainment industry. Upon graduation and after 100 job interviews, Becky started working in the Entertainment Marketing department, followed by the Comedy Touring department, at Creative Artists Agency, the world’s leading entertainment and sports agency. Five years later, she worked at CBS Television Studios, where she assisted with the casting of pilots and television series. During this transition, she also served as the Marketing Director and Co-Founding Board Member of the Catalina Film Festival. She also founded DisABILITY In Media, which focuses on positive disability inclusion storytelling through social media.

After her six and a half years of working in the entertainment industry, Becky launched a public speaking business. A prolific public speaker and advocate for disability inclusion on a global scale, she has spoken at over 100 venues, including schools, corporations, nonprofit organizations and government agencies, throughout the United States and Kenya. She’s really passionate about disability inclusion in schools, the workplace, and everywhere else.

More recently, she spent three and a half years working in the Equal Employment Opportunity (EEO) & Diversity department at Screen Actors Guild-American Federation of Television and Radio Artists (SAG-AFTRA), the world’s largest entertainment union. At SAG-AFTRA, she supported the implementation of a national diversity plan of action to achieve accurate representation of those groups historically excluded from the entertainment and news media.

Becky serves on the Board of Advisors for the National Center For Disability Journalism (NCDJ) at Arizona State University.