Episode 41: Stories for Success – How to get unstuck and move your plot forward (with Valerie Gordon & Carolyn Kiel) 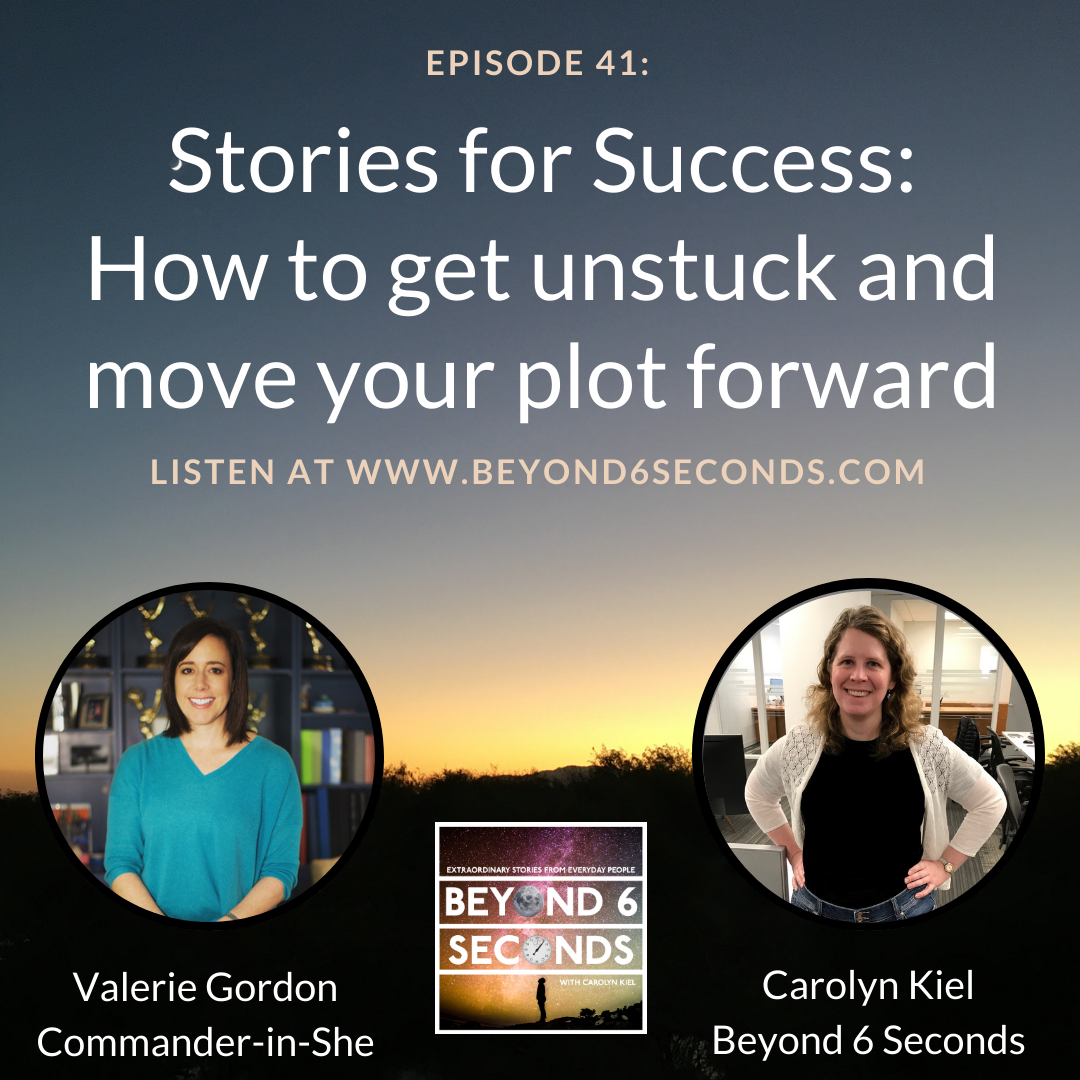 In this episode, Beyond 6 Seconds host Carolyn Kiel is interviewed by her guest, Valerie Gordon, a 10-time Emmy award-winning television producer and owner of the career and communication strategy firm, Commander-in-She.  Carolyn talks about a...

In this episode, Beyond 6 Seconds host Carolyn Kiel is interviewed by her guest, Valerie Gordon, a 10-time Emmy award-winning television producer and owner of the career and communication strategy firm, Commander-in-She.

Carolyn talks about a time in her career when she felt stuck and what she did to get unstuck, then Valerie & Carolyn share practical tips and advice for getting unstuck, including how to:

If you’re feeling stuck in your career, then you definitely want to listen to this entire episode!

Valerie offers workshops and webinars that teach the storytelling skills necessary to help high-achieving women ascend the leadership ladder. You can learn more about her work at www.Commander-in-She.com , connect with her on LinkedIn and follow her on Facebook, Twitter and Instagram @CommanderInShe.

Valerie Gordon is a 10-time Emmy award-winning television producer with more than two decades of experience creating and overseeing feature stories for ESPN, HBO Sports and CBS News, among other networks. Now the founder and president of Commander-in-She, LLC, a communications and career strategy firm, Valerie combines her background in storytelling with her passion for the important conversations and skills women need to harness the power of their stories.

Valerie offers keynote presentations, group workshops, team building and individual strategizing to demonstrate the role storytelling plays in our daily lives and subsequent success.  She has worked with corporations and professional organizations such as Aetna, Mass Mutual, the YES Network, Untapped Potential, Women in Cable Telecommunications, Women in Sports and Events and American Women in Sports Media.

Valerie’s introspective introductory workshop, “What’s Your Story? Storytelling Secrets for Success” allows participants to consider the components of their personal stories – character, plot and narrative point of view – and emerge with greater authorship of their current and future chapters.  Story techniques are the thread for specific presentation topics including personal branding, negotiation and conflict resolution, goal-setting, communication skills and work-life balance.

Valerie’s feature work has been seen on CBS News “The Early Show” (2004-2008), NBC’s “Weekend Today” (2002-2003), and HBO’s “Real Sports with Bryant Gumbel” (1998-2002), among other assignments.  She was a member of the Olympic profiles unit for both the Centennial Olympics in Atlanta (NBC, 1996) and the Winter Olympics in Nagano, Japan (CBS, 1998).  From 2008 to 2016, Valerie was a Coordinating Producer of ESPN’s acclaimed Feature Unit, supervising hundreds of features for studio shows, live events and special projects including SC Featured for SportsCenter and My Wish, ESPN’s collaboration with Make-a-Wish to grant sports-themed wishes to children with life-threatening illnesses. From 2016-2017, Valerie helmed Mike & Mike, ESPN’s long-running multi-platform morning show on ESPN Radio and ESPN2.

From 2014-2016, Valerie served as co-leader of ESPN Women, ESPN’s largest employee resource group, creating and overseeing professional development conferences serving hundreds of employees including “Leading at all Levels” (2014) and “Aspire/Inspire” (2015).  For her efforts as a catalyst for other women in the industry, she was honored at the 2015 WICT New England’s Evening of Excellence with the Touchstone award (2015).

In addition to her 10 Sports Emmy awards, Valerie is a 3-time Edward R. Murrow award recipient and 5-time NY Festival award-winner for both TV and radio and has been recognized with an NABJ Salute to Excellence and a Telly award.

A graduate of the University of Michigan, Valerie uses her life outside of work as a wife, mother, novice weightlifter and an occasional adventure race runner as inspiration for other relatable speaking and writing topics.  She blogs at www.Commander-in-She.com. Follow her on Facebook, Twitter and Instagram @CommanderInShe.